Here is my entry for the Tomie dePaola Illustration Award given by the SCBWI. The prize is a trip to New York to attend the SCBWI winter conference, lunch with Tomie dePaola (he’s been an illustrator for over 40 years and illustrated nearly 250 books), and some sort of little award presentation. 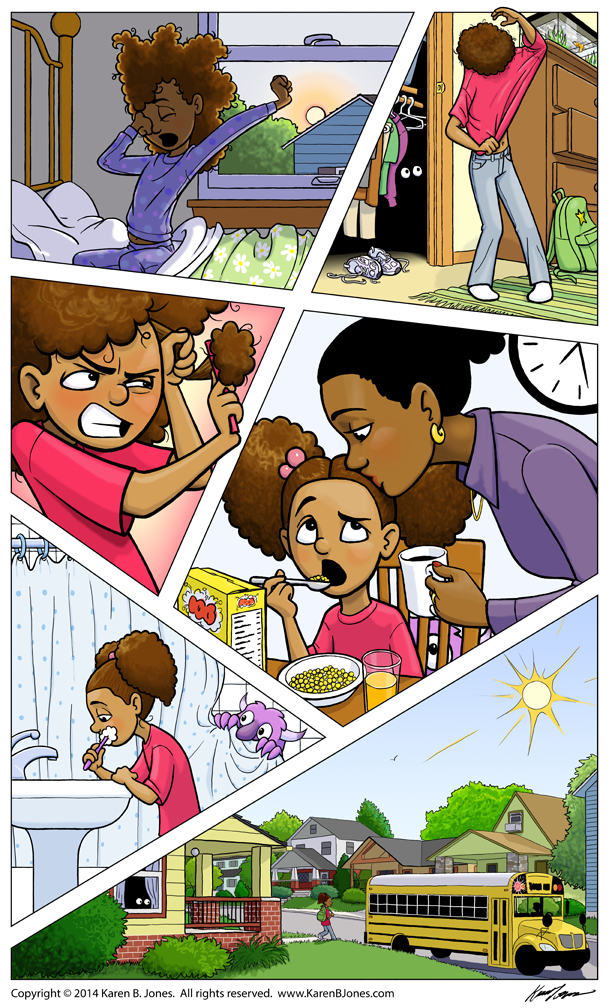 Visual sequence is key to conveying feeling, action, storyline, interest and character, especially in children’s book illustration. One of the hardest things to do is to know your character so well—what he, she, or it looks like, how they move, how they project emotion, and at the same time to make the character immediately recognizable and consistent —all without resorting to a generic depiction, but making sure your character has charm, individuality and special qualities that make young readers fall in love with them. All of this is the same whether your character is human, animal, and yes, even vegetable! (Maybe inanimate as well) The task is to create a six-panel sequence that has a beginning, middle and an end that is obvious, featuring a character of your own invention. It can be funny, sad, dramatic or ordinary, but interesting and with lots of invention and finesse.

So, this piece was designed to be a bit of a sampler. It has close views and distant views, a variety of expressions, a couple of challenging poses, a consistently drawn character (I hope!), and a bit of humor in an otherwise ordinary daily routine.

The girl is biracial because biracial children are under-represented in children’s literature and it allowed me to have her really fighting with her hair in panel 3. Two birds, one stone.

The monster is there because I had some empty space in the panels and it added humor and complexity. And I was a little bored.  Hopefully, though the series has a clear conclusion, you’re still left wondering, just a little, what’s the deal with the monster?

This is merely round 1 of a two-part contest. The second part won’t be announced until the 10 finalists are chosen. Wish me luck!

4 thoughts on “My Entry for the Tomie dePaola Award”