I’d like to talk to you all a little about facial proportions.  I’ve seen a lot of tutorials telling you that these are the proper proportions for drawing a face. 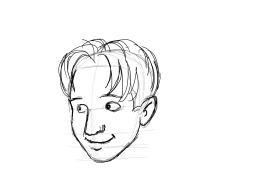 You basically divide the whole head in half, then the bottom half in half again, and that newest bottom half in half one more time.  Easy.  Instant guidelines.  And it looks pretty good.  It actually does work fairly well if you’re drawing in a cartoon style with eyes that are over-sized, like anime.  You actually need the middle of the face to be a bit distorted to fit those big eyes.

But it’s not a realistic proportion.  Just look what happens when I overlay those guides over my own face. 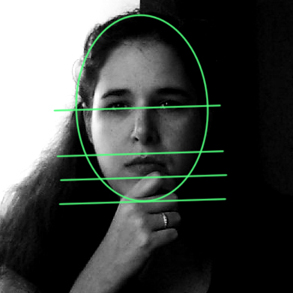 The nose is way higher than the nose line shows and the lips are a bit high.  And it’s not just that I have a freakishly proportioned face.  Look at these random old pictures of relatives. 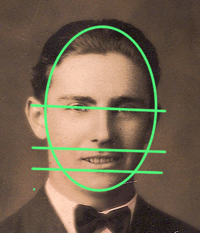 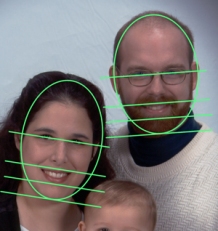 If you use these proportions to try to create a realistic image you come up with something much too long-nosed.  I think in hindsight that’s what I used to come up with the proportions for this self-portrait I made in high school (back in ’96).

It doesn’t look bad, exactly, but it doesn’t look right.  People have told me that it looks like me (or at least me at that age) except that my nose isn’t that long.

So, what are the proper proportions for drawing a REALISTIC face?  Try this: 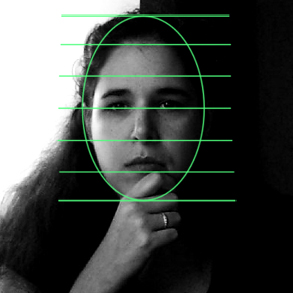 Six equal segments.  Easiest to divide the face in half, then divide the top and bottom into thirds.  The lines correspond roughly to the top of the head, hairline, eyes, bottom of the nose, bottom of the lower lip, and bottom of the chin.  If you divide that segment just over the eye-line in half, that’s about where the brows go.  And remember that individual faces vary.  Don’t get too reliant on formula.  It should be used as a guide, not a rule. 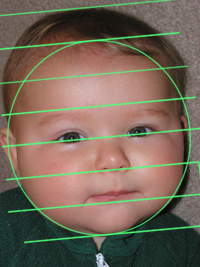 It works for babies too, but with an exception.  Centerline down is correct.  Centerline up is about another third higher to the top of the head than for an adult.  Kids have huge foreheads.

Now, the original half-half-half method is actually probably correct for cartoons and things with over-sized eyes that don’t need to be precisely realistic.  But you need to remember that it IS imprecise.  Otherwise when you DO tackle something realistic, you won’t understand why all your people look kind of horse-faced.