Here’s an image for page 15 of a safety-themed coloring book commissioned by Positive Promotions.  This page is about cyber safety.  The two siblings are each using their devices to access online content. 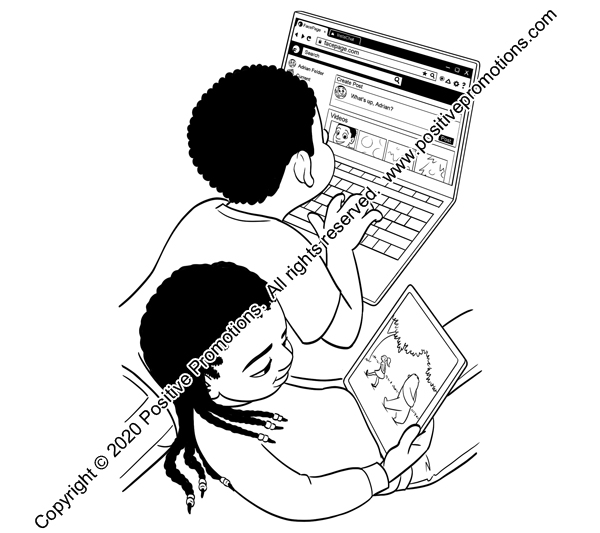 I thought I’d posted about this already, but I can’t find it.  So, I guess I didn’t.

Okay, so if you have a wacom cintiq (not the wacom cintiq pro) you may have noticed that the connector on the 3-in-1 cable that inserts into the screen tablet bends very easily.  You can destroy the flimsy thing just by bumping it.

This is a tremendous problem since replacement 3-in-1 cables are $50 or more and usually out of stock.

First, I can’t tell you how to fix the cord that’s already bent.  As far as I know, it’s a lost cause and you’ll have to buy a new one.  Sorry.  But I can help you so you won’t destroy the new one.

Choose the 2.0 version because it has a little more support for the cord, holding it in place really solid.

It’s basically a 3D printed adapter that you snap onto you cintiq and thread your cord through as you plug it in. The thing holds the cord pretty solid so that even fairly rough handling isn’t going to bend that easily-bent metal end. It installs in a way that’s removable, in case you need to transport your cintiq or something. However, my cintiq never leaves the vicinity of my PC, so I used some electrical tape on the back to get it really solidly adhered. It’s not going anywhere now. It completely solved all my cintiq flimsy cable problems.

I bought mine awhile ago and it had a wacom logo in it which I thought at the time they probably weren’t supposed to be using, since it’s an after market part.  The version they’re selling now is the same thing, but has a bad robot logo instead.  I think he may have been asked to stop using the wacom logo.  Anyway, it’s cheap and completely solves the problem, so go buy one if you own a cintiq.

So, here’s my “Girl Reading” image published in the November/December 2014 issue of the SCBWI Bulletin. 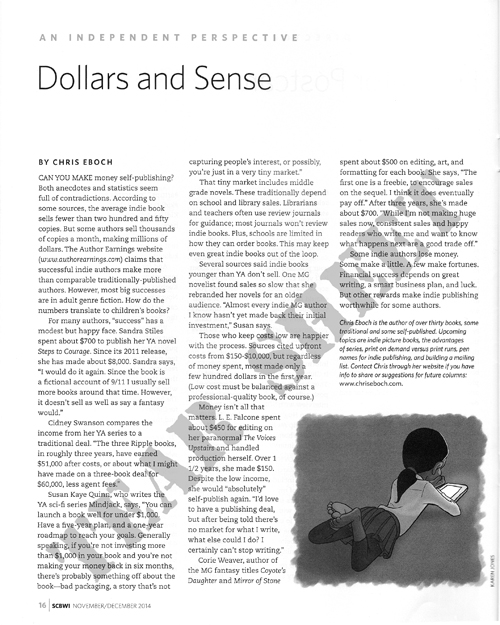