Here’s the 6th illustration for the book project I just finished for Learning A-Z. Page 8 of The Neighborhood’s Night by Juliana Catherine.

Here Leena’s family makes it to the emergency shelter, which is the gymnasium at a school a safe distance from the wildfires. The important points of this illustration are to show the three families standing in line at the front, that they’re in a gym, and that there’s a crowd of people already there. Since I didn’t want the crowd to make the background too busy and distract from the foreground people, I made them fade from minimally colored at the front, to completely gray at the back. The color in the room also fades a bit as it recedes into the distance.

It was important to the client that I show diverse families, because they wanted to show that all sorts of people had been displaced by the wildfire. That’s why, in addition to Leena’s family, one family group consists of two women and a child and the other has a little grandmother and her grandkids, including one in in a wheelchair. The characters are a bit small to really show racial traits, but they do have a range of skin tones and hair color to indicate diversity. They also are diverse in the amount of stuff they managed to bring with them, either by affluence or by luck, it isn’t clear. One family group has several nice, big, rolling suitcases while Leena’s family just has some duffle bags and the third family doesn’t have any bags at all.

Here’s the first page of a Petting Zoo commission for Learning A-Z.  I think the pigs were the most fun to draw.  I managed to put at least one in each of the three images for this set.  I particularly like the one reaching for the bottle on the right. 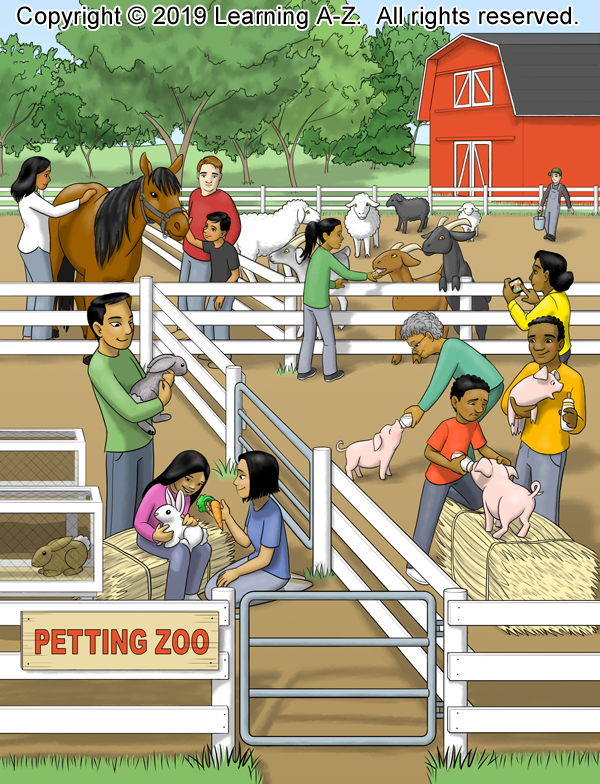 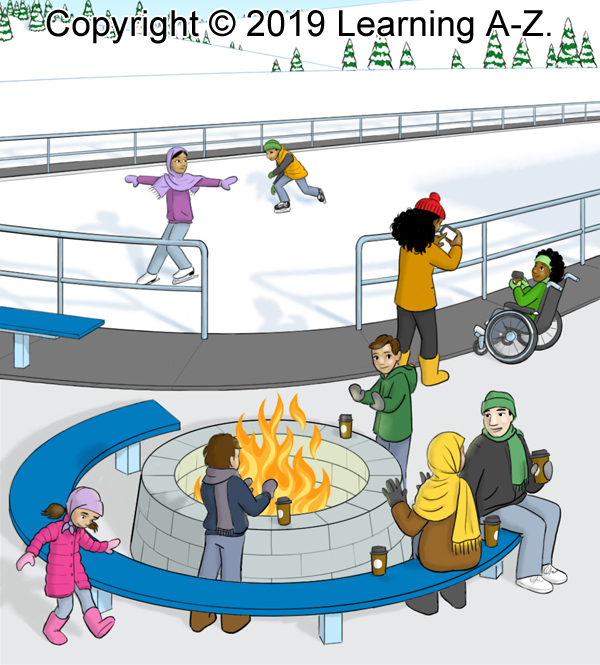 An illustration commissioned by Learning A-Z.  Kids and their families at a winter fair enjoying the cold weather activities. 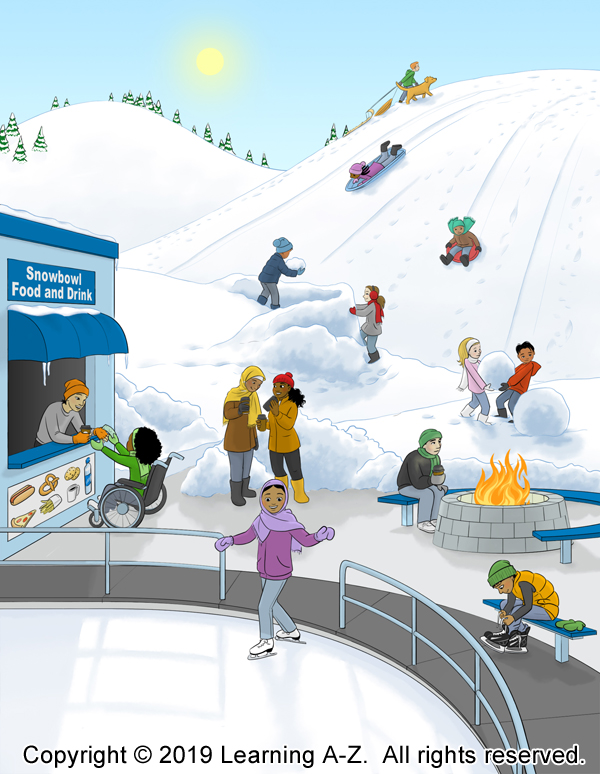 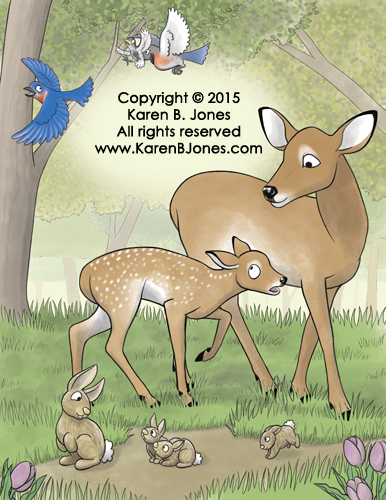 Does anyone else know one of these walking contradictions?

I’m talking about Moms who are so careful about their kids.  They baby-proof their homes until there’s nary a sharp corner or exposed outlet to be found.  They pull all the strings out of their kids jackets and hoodies.  They cut everything the child eats into quarter inch pieces to avoid any possible choking hazards.  They never let anyone post pictures of their kids online for fear that a child molester might see it and somehow track them down.  They carry disinfecting wipes and gels everywhere to sanitize the child every time they touch something that may be contaminated.  They shop around for just the right, highest safety-rated child safety seat for the car, no matter how expensive.  They agonize over whether or not to immunize their kids and fret over every illness or injury they acquire.

And yet, these same mothers think nothing of driving around town while using their cell phones.  Do any of them really understand the danger they’re putting themselves, their kids, and anyone on the road with them in when they do this?  Talking on the cell phone while driving, hands-free or not, increases your risk of an accident as much as driving drunk!  Texting is even worse!  Think about it.  Whenever someone’s doing something stupid in traffic, don’t you usually see a cell phone in their hand?  Often they never even realize how close they came to an accident until they actually wreck the car.  They just go drifting down the road oblivious to everything else.  Well, believe it or not, when you drive while using your cell, that person is you!

There have been several studies proving this. But people don’t want to believe it because, if they did, they’d have to change their behavior. What conversation or text message is important enough to risk the health and even lives of you, your passengers, and everyone else you’re sharing the road with?

But of course, they think they’re so much more careful than everyone else.  They can hold a phone conversation and drive at the same time.  It’s not dangerous for them.  They’re careful.  Maybe they restrict their cell phone usage to when they’re driving on slow, familiar routes.  But is that any better?  So, then they’re impaired when driving on residential streets where kids, pets, and other pedestrians may be crossing.  Or maybe they only use their cell phone on the long stretches of highway where they don’t have to change lanes or merge for miles.  Is that better?  Driving impaired when one wrong move could cause them to hit another vehicle at speeds that could kill someone?  But, of course, they’re careful.  It won’t happen to them.

There are so many distractions around us all the time.  Given that, why on earth would you voluntarily add the unnecessary, additional distraction of a cell phone to the din?  It could be the one last distraction that tips you over the edge and makes you plow into that pickup truck in front of you or that kid riding his bike.

Think of all the inconveniences you go through to keep your kids safe on a regular basis.  All that baby-proofing and vigilance.  All that to protect them from dangers that are, let’s face it, fairly remote.  Is restraining yourself from using your cell phone while driving any more unreasonable than that? And as a bonus, you’re not just protecting yourself and your passengers, but you’re protecting everyone else who is out there on the road with you.  Isn’t that worth the minor inconvenience?

Remember, your phone does store the number of whoever called you and they can always leave a voice mail message.  So, you can pull into a parking lot and call them back within 2 or 3 minutes if it’s really important.  Try not to even glance at the caller ID unless you‘re stopped.  Just like texting, anything that takes your eyes off the road is dangerous. Especially if it’s habitual and you don’t think about what’s going on around you before you do it.  It’s best to just wait until you’re stopped to check it.  Think how embarrassed you’d be if you caused an accident because you were checking your caller id or a text message.  Even worse than embarrassment if the accident was a bad one.  Could you live with yourself if checking your phone resulted in an accident that killed or crippled someone?

For God’s sake, put down the phone and drive! Pull over to text or talk! Make a promise to your kids that their safety is more important to you than any cell phone conversation!

This post was featured in Mamapedia Voices on May 31st 2010.