I think I’ll post some sketches. Here’s one I drew today between turns in a game of Dungeons and Dragons with my husband an daughters.

Inktober #28 was Float. Here’s that one colored in.

And here’s a color version of #24 – Dig. I think the dirt thrown back is still fading into the larger pile a bit too much.

And here’s a color version of #9 – Throw. Just made the fox and the ball orange.

And here’s a color version of #29 – Shoes. I used a muted, art marker style of color for this one because I wanted it to look soft.

So, I finished the Inktober series, but I wanted to go back and finish off some of them in color. Here’s the first one I colored. Inktober #26 – Hide.

Siren song counts as music, right? I hope so, but really… I just felt like drawing a mermaid. 🙂

It seems like every time I draw water, I do it differently. This style seems pretty good for mid-ocean swells.

So, here’s the new version of the Kissing Story page I posted before.  If you remember, there was some concern that the public display of affection was too much for the children’s market in the original version. So, here is a new version with the parental kissing off-panel. 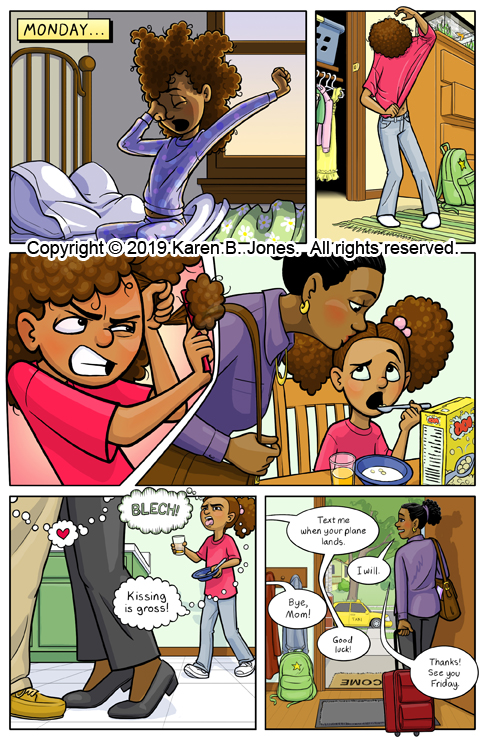 Here’s a cover I created for Alexandra Townsend for her upcoming middle grade novel.

(The title and byline here are just a mock-up and are a little sloppy.  The final text layout will differ.)

I decided to close my iStock account.  Unfortunately, some of the royalty amounts were coming out to less than a penny an image.  Now, I don’t expect to make much per image for stock.  The idea is you’re supposed to make it up on bulk.  However, less than a penny?  Really?  That would be insulting if the whole system wasn’t so impersonal.

I’m still offering my images through Shutterstock.  Their royalty rates, while still paltry, are at least better than iStock.

I may look around and see if there are any other stock image sites around that would be worth setting up an account.  Anyone have any suggestions for stock sites they’ve had good luck with?