I just posted a brand new holiday card to my Zazzle store. It’s my house vectorized and with Christmas lights.  And I have a coupon code for 60% off cards, among other things. Good until midnight on Friday, Dec 7th. Use DECKTHEHALLS at checkout. 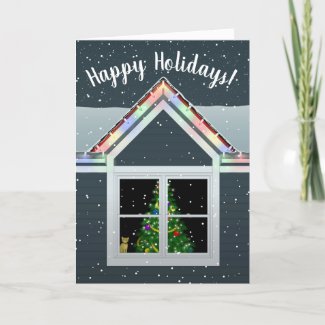 This is the time of year to think about buying Christmas cards.  I have several designs available at my Zazzle store.  (Lately they’ve been running some 60% off sales on holiday cards, which makes them a reasonable price.  Just look for the coupon code.          Use DECKTHEHALLS at checkout for 60% off cards until midnight on Friday, Dec 7th.

My latest is the Christmassy Streetcar that my Dad requested.

Last year’s card was my family ice skating.  Sorry it’s not a more universal image.  It’s very specifically my family, complete with Katie in her Canadian flag hoodie.  I have considered reworking it with polar bears or something skating instead, but I haven’t gotten around to it.

Before that was a snowman family.  (Also available in portrait orientation and on other merchandise.)

A single snowman with a cardinal perched on it’s hand/branch.  (Also available in portrait orientation and on other merchandise.  It’s particularly pretty on a coffee mug.)

And, for the more new age among you, a Stonehenge winter solstice card.

There are also tons of other products up on my Zazzle store.  Mostly prints and cards, but other merchandise as well.  More-or-less any decent images that I still hold the copyright on are fair game for Zazzle printing.  If there’s any of my work that you’d like to see printed on something and I don’t already have it up, just let me know.  I’d be happy to set it up for you.

(Preview images were generated by Zazzle.  They own the greeting card templates, I own the images pictured on the cards.)

I reworked my Medusa image because the original black and white one was sort of visually confusing. This one’s better.  I haven’t decided what I’ll use it on yet.  Coffee mug, anyone?

Here’s a poster of it.

I also colored in Cerberus and put him on a T-shirt.  Click here for that.

Who’s a gigantic menacing monster?  You are!  Yes, you are…

I colored this one in and made it into a Zazzle shirt today.  Get it here.

I made a T-shirt with my voodoo doll image.

This is one of my favorite images.

I put up this T-shirt today on my Zazzle store.  Here’s the link.

An old witch rides her broomstick with her black cat.

Just put this one up as a Zazzle T-shirt.  Here’s the link.

Cute and Creep at the Same Time